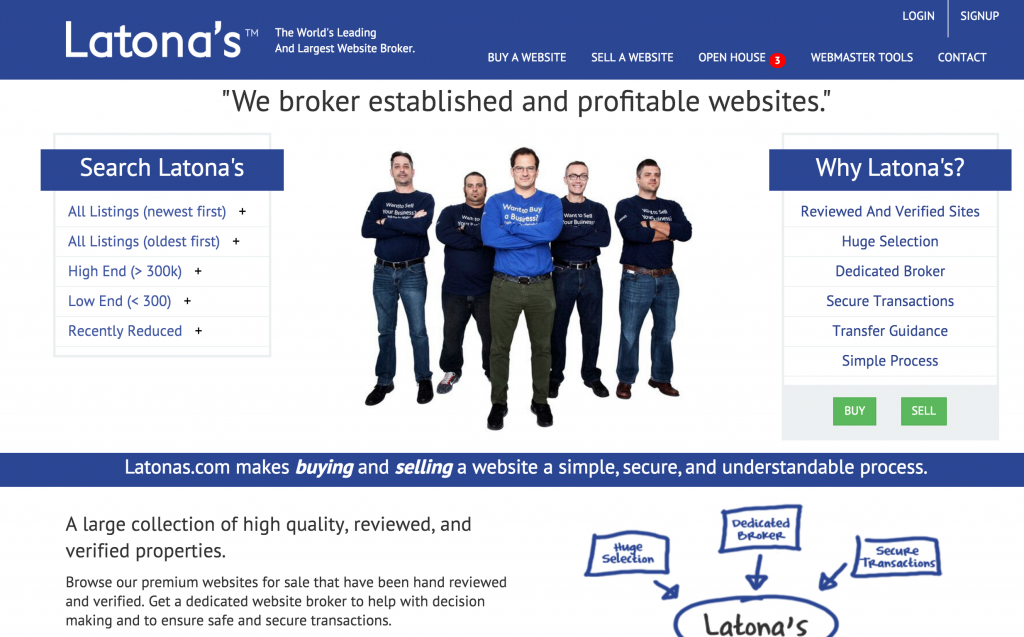 Based on listing numbers, Latonas is the largest website brokerage, however it’s also by far the most controversial one.

Established in 2011 (2009 as a Domain Brokerage, later pivoted), Latona’s generally lists smaller properties, anywhere from as little as $3,000 to $200,000. Larger properties are rare but do show up at times.

Latona’s tends to often significantly overvalue the assets that they list, likely in order to gain listings that would otherwise end up with the competition. This results in most listings remaining unsold for long periods (see below), until the seller is convinced to significantly lower their price.

As witnessed by several of my clients over the years, very little is done in the way of due diligence and virtually anything can get listed. Therefore it’s extremely important to perform your own thorough due diligence as a buyer and leave no stone unturned, as high quality assets are mixed with extremely low quality and sometimes fraudulent sites.

As of recently, Latona’s has started providing PDF prospectuses in addition to the information that they make available on their website to registered buyers.

Based on a small sample, Latona’s prospectuses appear to cover most of the basic information necessary, as well as feature a Seller Interview, however the quality can usually not be compared to some other brokerages.

Provided documentation, predominantly financial information, is often inconsistent and depends on the individual broker representing the listing and seemingly on how thorough financials the seller has provided, as standards in this appear to be lacking.

The firm has been operating as a website brokerage since 2011 and employs a fairly large number of brokers, therefore there’s little in the way of concerns about longevity.

Latona’s are well known to employ highly questionable marketing practices, such as sending out unsolicited emails claiming to have a buyer interested in your site, only to get you to sign with them, at which point the buyer no longer exists. This practice has been reported by a large number of people over several years.

Latona’s also appears to consistently ‘game’ various online review sites, as can be seen here, where a large number of positive reviews are all posted in a very close date range and by unestablished accounts, making it highly likely that the reviews are not legitimate.

Inventory is typically well over 100 listings, however due to the price inflating and the listing of low quality assets, turnaround is extremely slow and many listings are active for a year or longer.