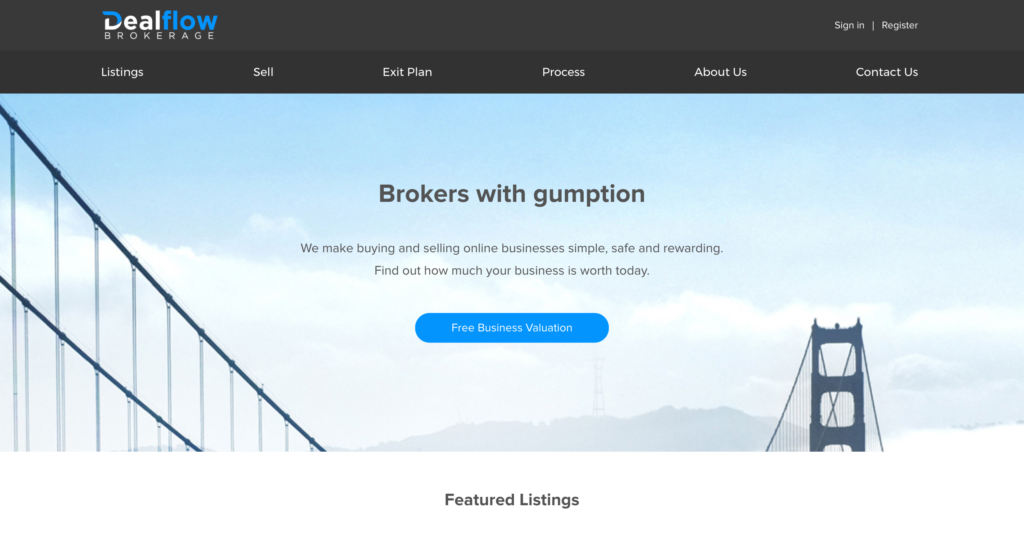 Dealflow was initially introduced in 2013 as Flippa.com’s Premium Brokerage Service, which has since branched out as an independent brokerage in April 2017.

Dealflow tends to specialize mostly in smaller (sub-$1 Million) acquisition opportunities, with significant inventory in the $100-$200k range at times.

In the interest of full disclosure, I was closely involved with Dealflow from March 2014 until October 2015 and have built the majority of their current processes myself. As of October 2015 I am no longer involved with either Flippa or Dealflow in any way, however.

As usual, there’s virtually always some room for price negotiations however.

Dealflow employs a high level of due diligence standards and has set up robust processes to eliminate the chance of fraudulent or unsustainable businesses being listed.

Brokers, however, appear to have the last say over which properties get listed and due to the commission-based nature of the industry, it’s likely that lower-quality or ‘borderline’ properties slip through the cracks at times, so buyers should always do their own due diligence.

The marketing materials that Dealflow provides are generally sufficient to make a preliminary decision and include a robust seller interview, but the overall quality depends on the individual broker in question and seller interviews are often ‘templated’ and poorly customized, leaving many important questions unanswered.

While Dealflow is no longer owned by Flippa, the two companies retain close partnership ties, making it highly unlikely that the company would cease to exist. Both Dealflow and Flippa have sizeable teams, meaning that in the event that an individual broker becomes unavailable there will always be someone to take over.

There are also significant centralization processes in place which allow brokers to exchange information and easily take over listings if and when necessary.

Dealflow is showing a high level of integrity both in their dealings with clients and partners, as well as their marketing practices.

Note however, that Dealflow’s prior parent company and now strategic partner Flippa has been known to engage in unorthodox practices, such as disguising a significant price increase as a price drop and employing dubious due diligence practices.

Smaller properties tend to turn around extremely quickly, often in a matter of days, whereas larger sites often remain listed for several months.