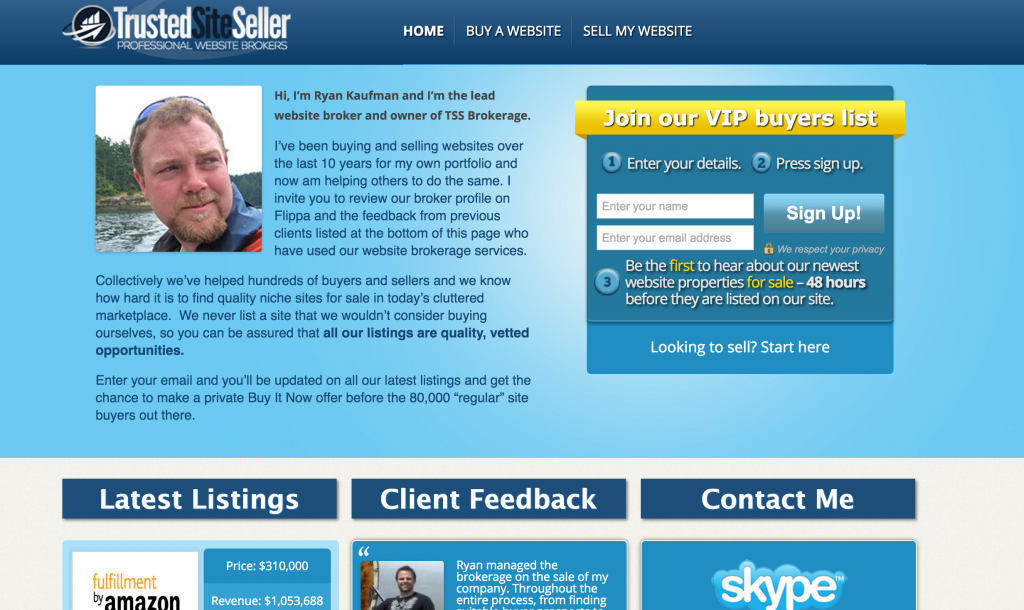 First established in 2010 Digital Acquisitions (previously called Trusted Site Seller) is a smaller brokerage that was taken over by Ryan Kauffman since 2012. At first its business revolved around utilising public marketplaces such as Flippa, assisting sellers in listing preparation and sales, but they’ve since transformed into an independent brokerage.

In early 2017, the company rebranded themselves as Digital Acquisitions, and appear to have partnered up with a few more people – Dustin Struckman and Luke Havard.

TSS’s listing volume has never been high, only closing a handful of listings each year.

Please Note: the below information is from the time the company was operated by Ryan alone. The recent rebranding and change in focus may have affected some of it, but we lack enough information just yet to report back on any recent changes.

Valuations tend to range a lot, with some properties being significantly under-valued (likely to achieve a quick sale). The majority of properties however appear to be valued reasonably.

As with most smaller brokerages, the ‘barrier to entry’ in terms of listing quality tends to be somewhat lower than that of more established firms. Fraud is however rare and the reviewer hasn’t been made aware of any occurrences.

TSS’s marketing materials generally include most of the expected information, as well as a seller interview, however there are inconsistencies in how financial information is presented, likely due to the lack of a centralised process and simply taking what’s provided by the seller and passing it on to buyers.

TSS has been operating since 2010, but has not developed a significant infrastructure and still relies on one owner-operator closing a handful of transactions each year. Due to the low transaction volume and reliance of a single person, there’s always the risk of discontinuation of operations, as well as the lack of a safety net in case the broker isn’t able to serve a particular transaction for whatever reason.

EDIT (March 2016): According to TSS, they have now hired two additional brokers and are seeking to grow significantly this year.

TSS has demonstrated a high level of integrity in dealing with both clients and co-brokerage partners alike.

Inventory is usually extremely low – between 2-3 properties – mostly in the sub-$100,000 price range. Turnaround times differ but in most cases properties remain available for several months or longer.